Blog
You are here: Home1 / Blog2 / Uncategorized3 / Fit to Write

In 1988, a group of advertising execs created possibly the greatest, most influential fitness campaign slogan ever:

Do an internet search on writing, and you’ll find much the same advice:

If only it actually were that easy.

What the ad execs were getting at (in an attempt to sell shoes and other various fitness apparel) is that there really should be no excuses between you and the thing you are setting out to do. “Just do it” cuts through any possible block you could put up. “I don’t have time” becomes “make time.” “I don’t have the right equipment” becomes “get the right equipment.” “I don’t know what to say” becomes “say anything, keep saying anything until it becomes something, and then say more about that.”

There is — or there should be — nothing that keeps writers from writing. Like running, swimming, and sure, probably competitive eating, daily practice is the key. Just do the thing. Just write.

People obviously underestimate just how creative writers can be in coming up with excuses why they can’t, in fact, just write. 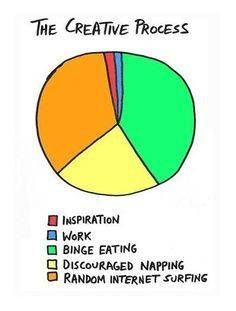 I have had some of the best naps of my life starting about 20 minutes after I sat down to write, because something about the process suddenly makes me super tired. The amount of resistance I have to the actual doing of writing is tremendous, so much so that it often takes a Herculean effort to even sit in front of my computer for ten minutes. It’s as if I am a beginner runner trying to convince myself I can make it through this one lap, or this next minute, without stopping (or actually dying from an acute inability to breathe). In fact, I have gotten in better running shape with more ease than I have gotten through certain sections of a book — and I am not in any way, shape, or form, someone who has ever actually enjoyed running; running, like writing, is something I have only ever enjoyed have had done.

I have never been a particularly disciplined writer, relying on the sheer terror that a looming deadline evokes in me to get me through that giant cloud of resistance so that I can actually write. I don’t have great writing discipline, or, really, any writing discipline, and it frankly shocks me every time I actually finish any piece of writing. It’s almost as though I finally force myself into a fugue state, after which I have something I can maybe sort of push and prod into something else that I feel mostly okay having other people read. At some point, despite all my best efforts not to, I finally do in fact, just do it. I write.

This is less than ideal. I would love a daily writing practice. I would love to get to the point where I can sit down in front of my computer and get to work without a certain tightening of my chest, a sudden thirst or hunger, or a desperate need to just rest my eyes, just for a few minutes, and then I’ll totally knock out some pages. It’s not like I don’t know what I have to do. Nike has been telling me what to do for the past almost 30 years. Just do it. Just. Do. It.

And I’m totally going to.

Originally posted on The Stiletto Gang blog on May 17, 2016.

The Vortex of Public Opinion
Scroll to top