For my inaugural blog on The Stiletto Gang, I wanted to make a good first impression. And then I found out on the day I was going to post my first ever Stiletto blog that I had read the instructions wrong (mixing up AM and PM in the time I was supposed to post) and that I had already messed things up.

So much for good impressions.
I’m going to go ahead and blame this on the fact that lately I have been writing a lot of villains. 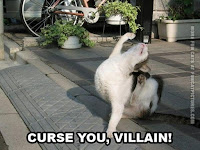 In fact, I have been writing them in first person, which means I have been spending a lot of time trying to sound, well, horrible. And it has been surprisingly easy.

See, here’s the thing —  your classic villain has really simple wants and desires. There really isn’t too much to complicate wanting to take over the world, or on a smaller scale, take all the power. They have a very clear idea of where they are in the universe — they are the ones who get what they want (or should, and will go to any lengths to do so). Heroes often have to be coaxed into action through some sort of inciting incident, but a villain is very self motivated.

Your typical bad guy has it all planned out and knows exactly what they want to do next. In fact, taking advice from a writing teacher 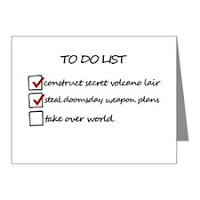 from undergrad, I often think of stories from the villain’s perspective first, since they usually have the more elaborate plans than the heroes do. After all, they are the ones that take the actions that the heroes have to respond to.

Finally, villains get to be, well, funny. And mean. This is where sometimes I feel like maybe I am a horrible person, because getting into the head space of a terrible person and letting all that pent up anger and frustration out just feels so…good.
There is a reason why many actors say that playing bad guys is more fun. It’s cathartic to get in touch with your own dark side. The more evil the villain, the easier it is to slide into that space for me, to contemplate a world where my character is at the center of it and doesn’t have to think about anyone else. There is no grey area, only clear black and white, a necessary oversimplification that lets my character feel free to to the horrible things he or she does. I believe it was Jeremy Irons who said that the trick to playing bad guys is that they never actually think of themselves as bad — they are always the heroes in their own stories. They are just heroes with most, if not all, the moral ambiguity stripped away.
As much fun as it can be to slip inside the head of a true bad guy, the best part about writing villains is that eventually I get to make sure they get what they deserve. Maybe that is where the true catharsis comes in, finding a way to create some small measure of justice in a fictional world, when so often it seems to be lacking in the real world. So, here’s to all the great villains: may they get what they have coming to them.
Originally posted on The Stiletto Gang blog on February 16, 2016.
https://jennaephillippe.com/wp-content/uploads/2016/06/funny-cat-pics-curse-you-villain.jpg 451 600 jmphillippe http://jennaephillippe.com/wp-content/uploads/2015/02/GEARS2-340X156.png jmphillippe2016-02-16 02:00:452016-06-21 23:33:04A Villain’s Voice
4 Question Interview

Art and the Political
Scroll to top