There is this saying:

For most people, the shape of that life can be found in their daily routines, the tiny habits that carry us from waking up to going to sleep. Routines are seen as either amazing and wonderful, or soul-sucking and dreadful.

I am someone who has always resisted a routine. I wanted each day to look different than the one before it.  I wanted spontaneity and that sense that anything could happen. And yet, I fell into a routine anyway, because that is the nature of life. Work and school and other external structures shape our days, forcing us to wake up at certain times, which forces us to go to bed at certain times. The space in between carries all the usual things — taking showers, eating meals, doing chores, walking the same familiar paths of each day. 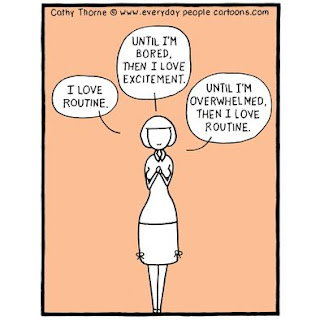 Moving to NY from LA, there were certain routines that made me feel safer. I began to go to the same places over and over again, and countered my fear of being alone in a new city by becoming a regular. There is a pub in midtown where they not only know my name, they know my order, and at least as much about my life as a casual social media friend. There is comfort in that, comfort in the familiar, in the steady rhythms of the day-to-day. Routine is just being a regular in your own life. 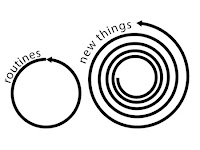 What I have come to learn as I’ve gotten older is that routines happen whether we consciously form them or not. And in fact, consciously forming them (or changing them) is actually really hard. Now that I have a new job, many of my old routines have been forced to change, and I’ve been in this weird in bet

ween space where I haven’t figured out the new ones yet. I keep hoping this will be a great chance to shape how each day will look with more consideration than my days before. I want to add healthier habits to my routine and break away from some older, less desirable ones. I want to take my lunch every day, and do laundry more than on a “now we really are out of clothes to wear” basis. When my friends joke about not being able to adult anymore, I really feel like what we’re saying is that the routines of life can be overwhelming. The laundry always needs to get done. The dishes always need to be washed.

And if you’re a writer, that next project is always going to be in need of more work — writing, editing, planning, marketing. Work only gets done through the careful application of regular effort. Or it doesn’t get done, because your routine doesn’t include that particular effort.

No one wants to feel like each day looks just like the last. But I think that sometimes my own resistance to that is actually doing me more harm than good. Each day DOES look like the last, because it turns out spontaneity takes its own kind of effort (and that I’m really more of a plan-ahead girl). Weeks get defined by regularly weekly activities — taking out the garbage, watching a particular weekly show, that family member that calls every Sunday, like clockwork.

I am hoping that I will be able to actually use this external change of a new job to help me build a new and improved routine. The thing about things moving along like clock work is that they move along. If you want the gears to keep grinding, you need to give them a familiar path around the wheel.

*Originally published on The Stiletto Gang blog on September 20th, 2016.

Fall is the Time for Book Giveaways!
Scroll to top